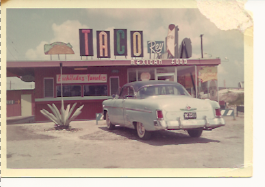 “Back then the Ramirez children were young” Ramirez said,  “and in elementary school.  The business opened late, pulling in customers from the nearby drive-in theater who wanted an after-movie meal.”

Mrs. Ramirez and husband would stay at the restaurant until midnight cleaning the facility then go home and put the beans on to cook overnight, she said.  In the morning she would bring the cooked beans to the restaurant for another day of business.  “We didn’t know anything about the restaurant business,” Hamilton said.  “When we opened she(mother) used a small skillet to cook the taco meat.”  “It hasn’t always been easy like this,” Ramirez said.  “When we first started we had 13 -to 14 hour days.  We’d mop the floors and cook and clean.  You have to put a lot of effort into this to be successful,”

The Taco Rey recipes are all original and haven’t strayed from their beginnings over 52 years ago.  Ramirez stayed active in the restaurant making fresh flour tortillas and working behind the steam table for years, Hamilton (daughter) said.

Employees are like family and tend to stick around for decades.  One loyal employee has worked alongside the Ramirezes for over 35 years.  She makes eight to nine dozen flour tortillas by hand each day and said she never thought about working anywhere else because she’s “very happy here.” 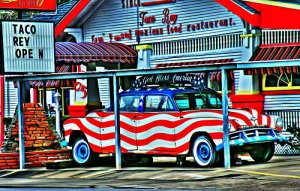 The restaurant, located at 1505 Nederland Avenue, Nederland ,Tx, holds mementos from days gone by.  Framed advertisements and photos showed the specials of the time: six beef tacos for $1, five shrimp tacos for $1, and the Number One Dinner , now called a deluxe platter, went for 65 cents.

“We were the first drive-through restaurant in the city(Port Arthur) and the first to sell homemade flour tortillas,” Ramirez said.  “And we still do it the same way we did it when we started out.”

Albert Ramirez loved antiques and collected the many items displayed at Taco Rey,  from the old phone booth taken from the Sabine Hotel, items from the Logan Hotel an antique punched tin ceiling tiles that were taken from homes being torn down in Port Arthur, Hamilton said.

Then there’s the 1940s era phone books for the Nederland and Port Neches communities, pointed out by Hamilton

Customers take a peek at the books and find their grandparents’ names, she said.

Even the wood covering the walls of the near century-old building on Nederland Avenue is the work of Albert, who salvaged the beaded boards from demolished homes and painstakinglly treated and installed the wood.

Glossy photos of stars from Hollywood’s glamor days line walls and even ceilings in some of the rooms.

The restaurant moved into the Nederland location in 1983.  The building was formerly a three-bedroom, two-bath home, something unique for the early 1900s.

ATMOSPHERE and GOOD FOOD are not the only ingredients in the recipe for the success of Taco Rey.

“Success is liking the restaurant business and getting along like family,” Ramirez said.  The SERVICE, Hamilton adds, is another reason for the restaurant’s success over five decades.  The employees know the customers and often welcomes then with hugs.